Proper workout recovery is achieved by a combination of good nutrition and massage therapy. Considering that getting traditional massage therapy is tricky nowadays and can be expensive if you’re going in for multiple appointments, it can be fun and practical to use recovery devices that aim to minimize DOMS (delayed onset muscle soreness) and get you back on track.

A particular type of recovery device has been making quite a buzz in the fitness and sports recovery scene and coincidentally makes for the perfect any-type-of-holiday gift for your fitness enthusiast friend or family member: the massage gun.

With all the different massage guns showing up in your social media feed lately, two brands stand out. The Theragun, which we all know is the premier massage gun – the granddaddy of the massage gun movement if you will. And you have the new kid on the block – The HYDRAGUN – which has been making waves among fitness trainers, athletes and lifestyle bloggers since its launch in Australia last October.

So, being that 2020 is coming to a close and you – our beloved readers – are probably searching for the perfect gift either for yourself or your fitness buff/athlete loved one, here’s a head-to-head HYDRAGUN Vs Theragun review for your reading pleasure.

We’d be using the following terms throughout the article, so it’d be helpful that you get an idea what they mean:

The higher the RPM, the more intense the massage

Amplitude        The distance the device head travels from the gun and measured in millimeters.

The longer the amplitude, the deeper the massage.

Decibels (dB)       How loud the massage gun sounds when turned on.

The higher the dB level, the noisier the device.

Stall Force Maximum amount of force you can apply to the device before it stops running.

It is rare for users to apply an amount of force strong enough to stop the device. Although

some users may do so because they have less sensitive or tighter muscles.

Now that’s out of the way, on with our HYDRAGUN vs Theragun review.

Both the Theragun and HYDRAGUN come with a carry case, which is good for people that travel a lot. A note about this though – BOTH devices have their name printed/embossed in the front of the case – well, just holding a case with the word “gun” in it did earn us some curious looks while we’re outdoors. Don’t know guys – maybe just emboss your logo next time? Just an idea. 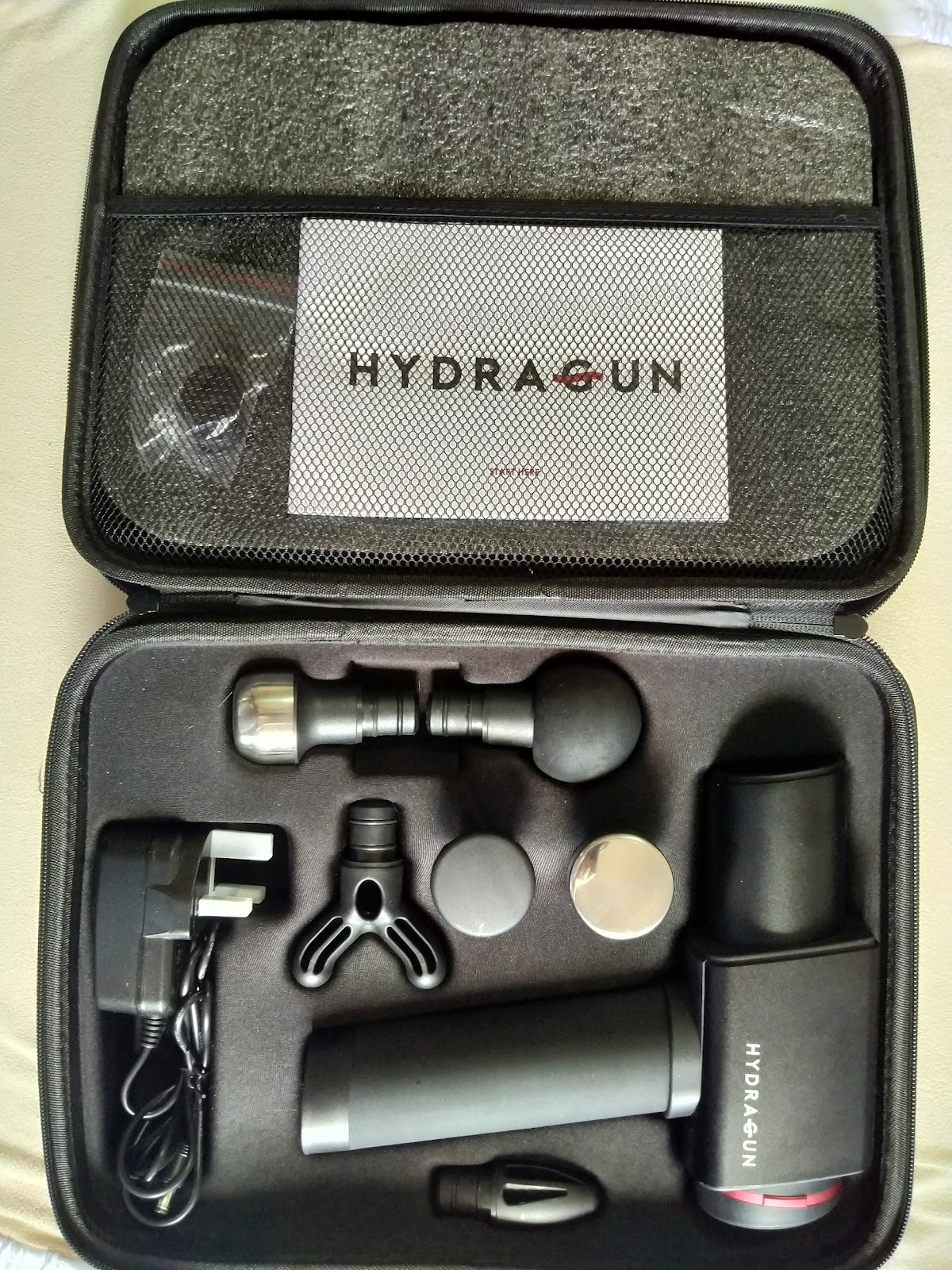 Hydragun has a slimmer case and we also liked that it has a place for all its accessories – the attachment heads, charger and user manual – everything is in one case that we can either carry on it its own or pop into a gym bag.

We also sprayed some water on the bag and we found that it’s water resistant, so you don’t have to worry about your gear getting wet if you have the case near a pool, or you have it with you outdoors and it drizzles. Just make sure you don’t drop it in a pool of water or something. 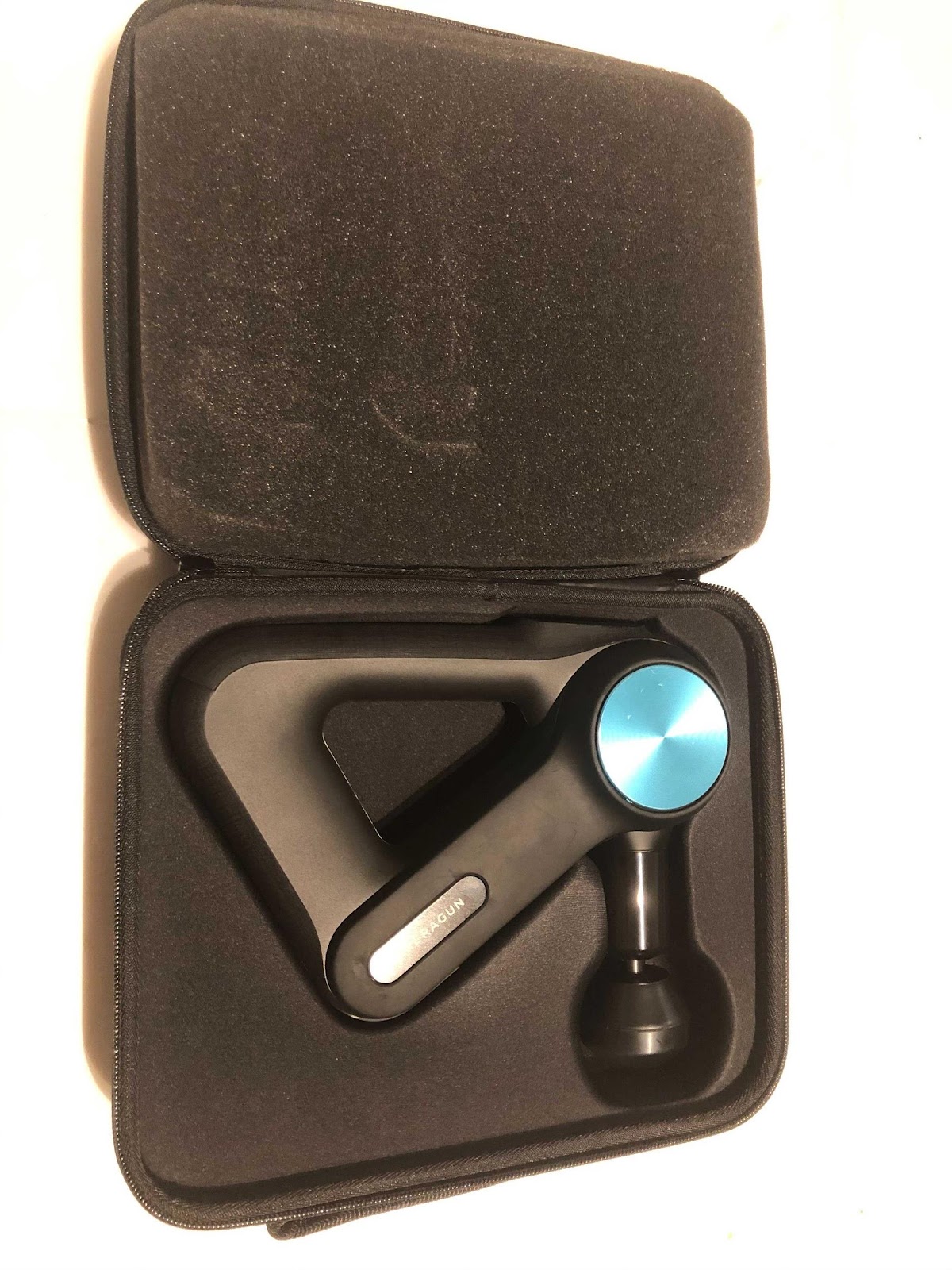 Theragun’s case on the other hand just houses the gun. You get a separate pouch for the chargers, extra batteries and attachment heads.

The bag is also bulkier and heavier than HYDRAGUN’s which is a bit difficult to fit in a gym bag and you also have to make room for the separate pouch. And yes, the carry case is also water resistant.

VERDICT:  HYDRAGUN wins this round. It’s easier to have all the accessories and the device in one bag and it’s lighter, easier to just put in your locker or gym bag.

A massage gun needs to be easy to use. That’s the whole point of the technology. And here are our thoughts on both devices. 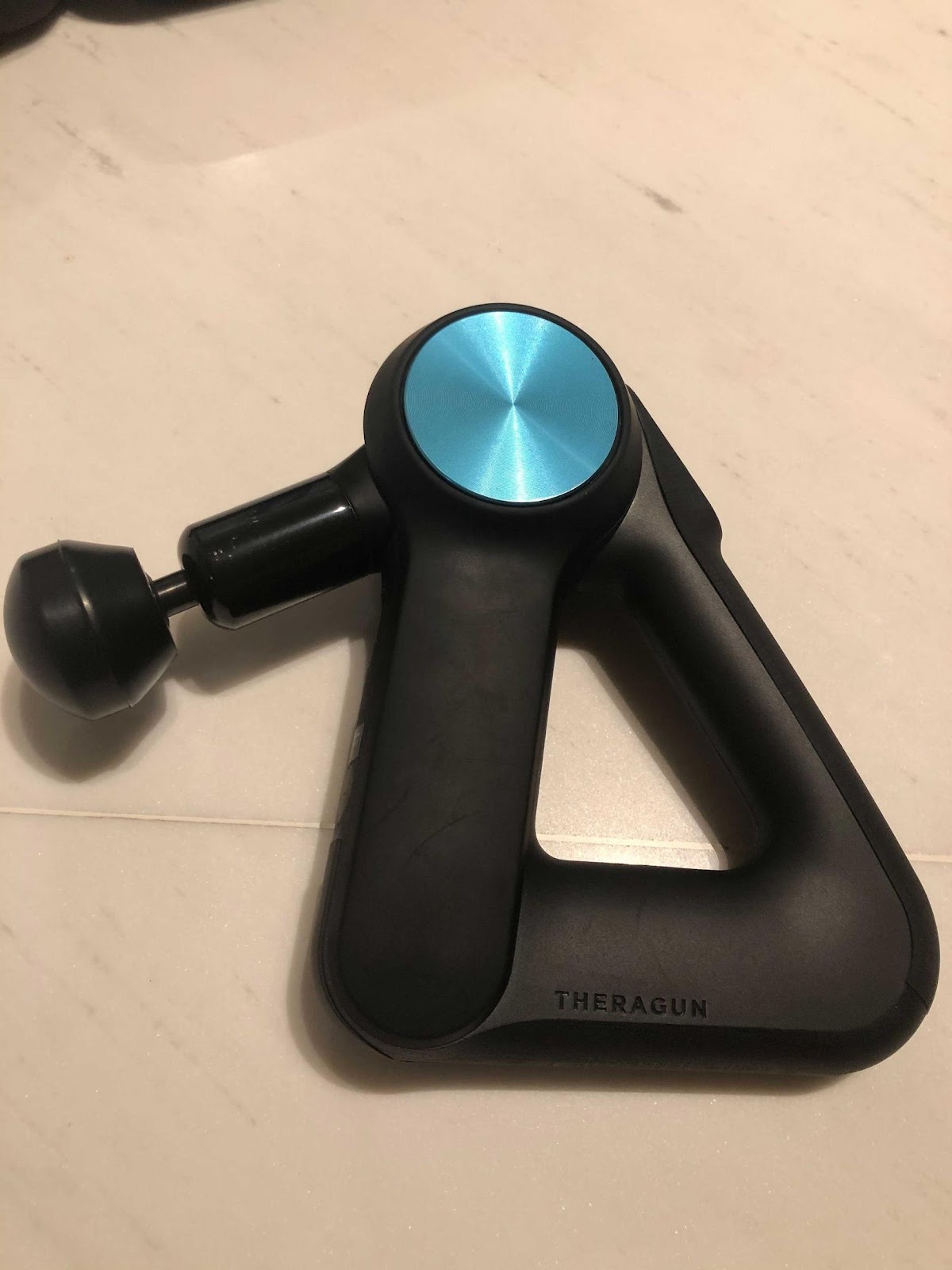 We loved the unique design/look of Theragun. We liked that the name is embossed and not printed on the device.

It’s made of composite plastic so it’s pretty solid but also a bit heavy. If you’re going to spend 15 to 20 minutes massaging yourself and you already have a sore arm, using this can be a bit uncomfortable.

We were happy about being able to adjust the arm’s angle on the Theragun. It makes it so much easier to hit those hard to reach, tight spots between the shoulders and upper back. 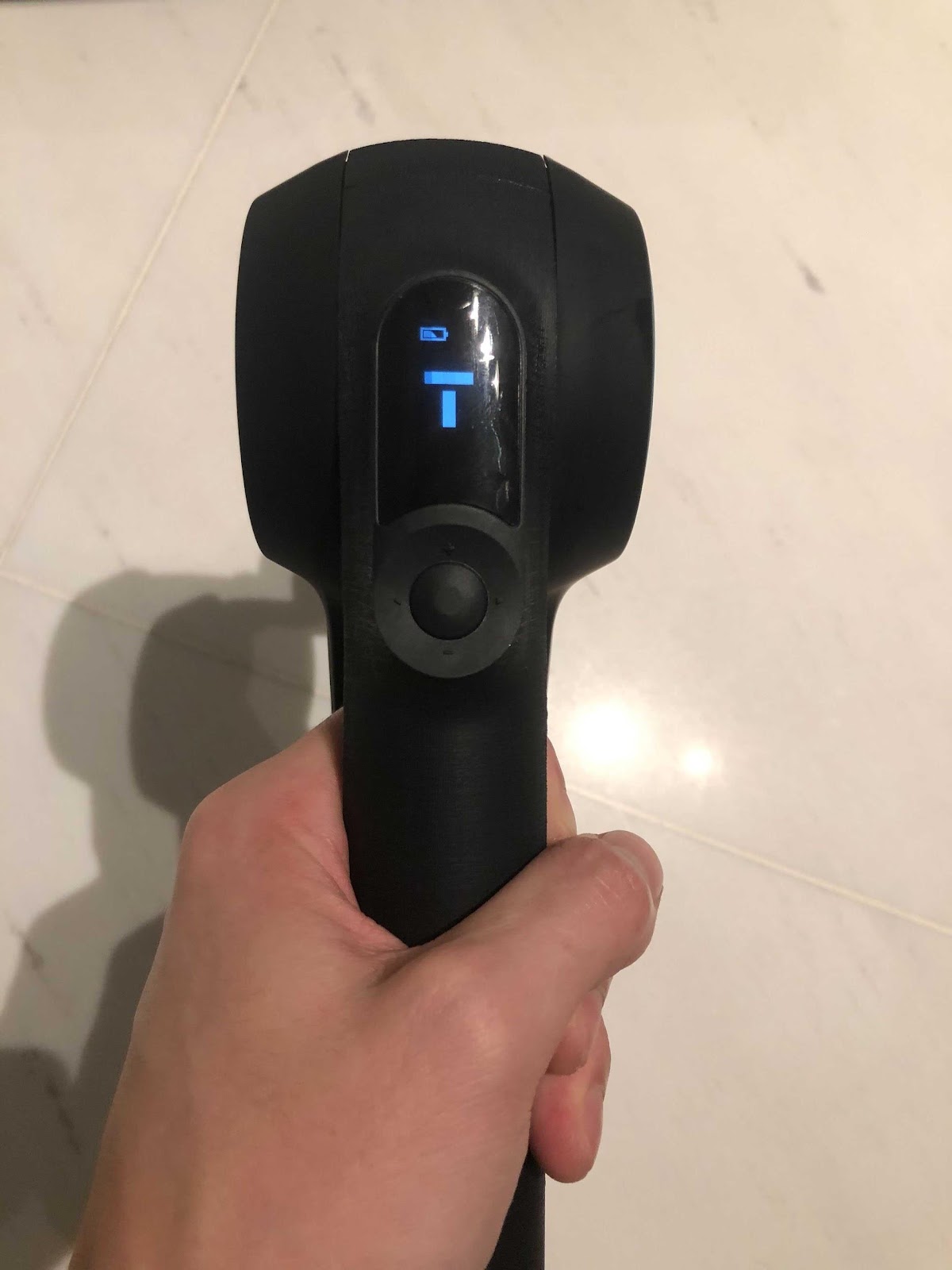 Another thing that we liked about this device is the straightforward functionality. You press one button to turn the device on or off and adjust speeds.

We liked that you can easily tell that the device is turned on, how much juice you got left on the battery – and that LED interface is so cool to look at.

Hydragun on the other hand is made of aluminum alloy so it’s lighter than Theragun. But not that much lighter, to be perfectly honest. It’s a bit tough to use on the upper back, so it’s good that the handle allows for a firm grip. 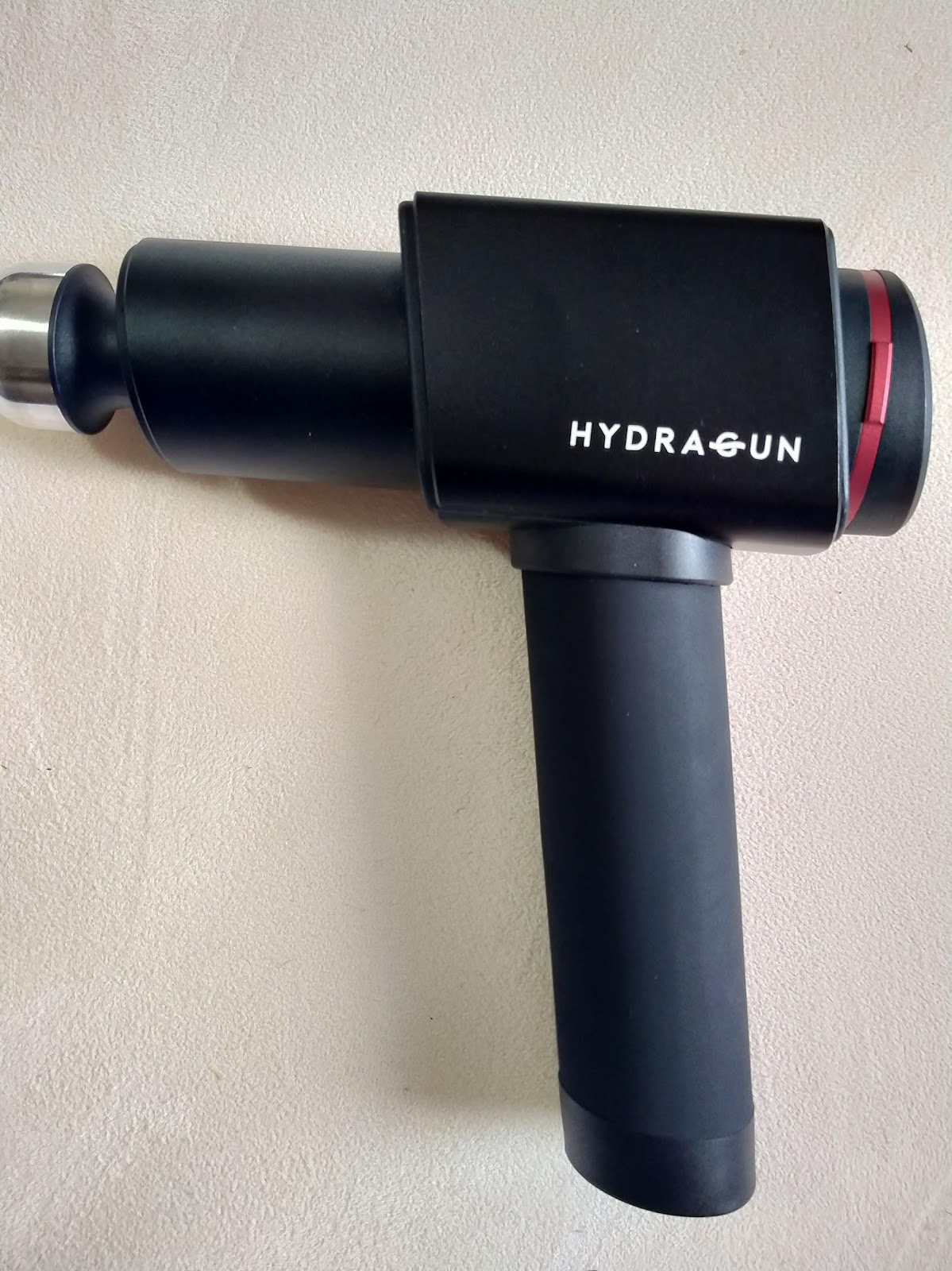 We liked how the grip of this gun is made of nano-silicone and not cheap plastic or metal. It’s comfortable to hold even when the device is vibrating like crazy while in use.

The minimalist design is refreshing although we wished that name was embossed rather than printed on. Would’ve looked better, that’s all.

The HYDRAGUN also has a one-button-for-all feature. So, you press on the middle button for two seconds to turn it on and press it again to adjust speeds.

The problem we have with HYDRAGUN is it’s a bit confusing to turn on. The thumb completely covers the LED power indicators so we didn’t know if we’ve already turned the device on. 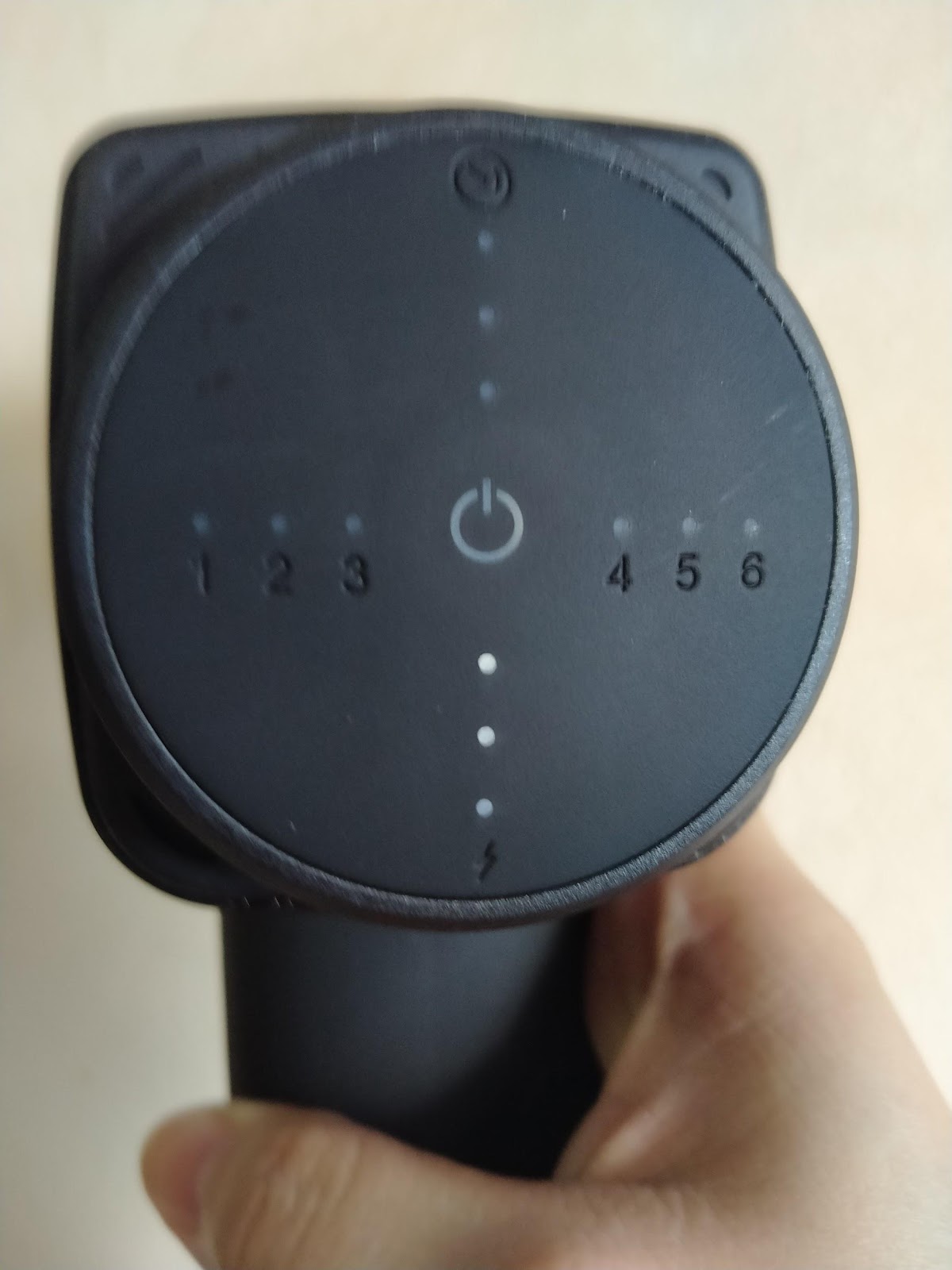 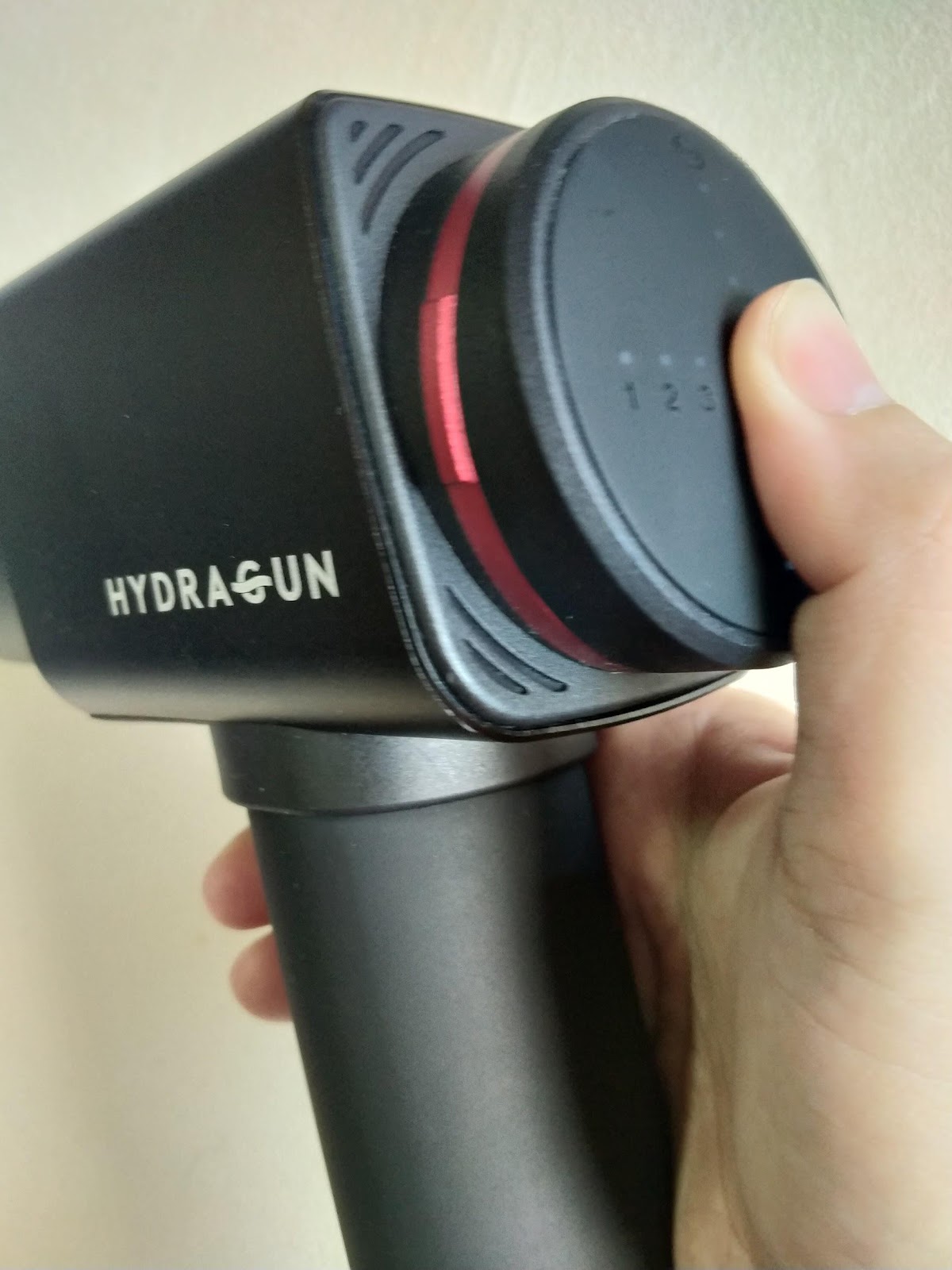 VERDICT: Theragun wins this round. The LED interface makes it more functional, the triangle design is unique and we’re able to hit those tight spots between the shoulders and upper back easier because of the adjustable angle of the device’s arm. 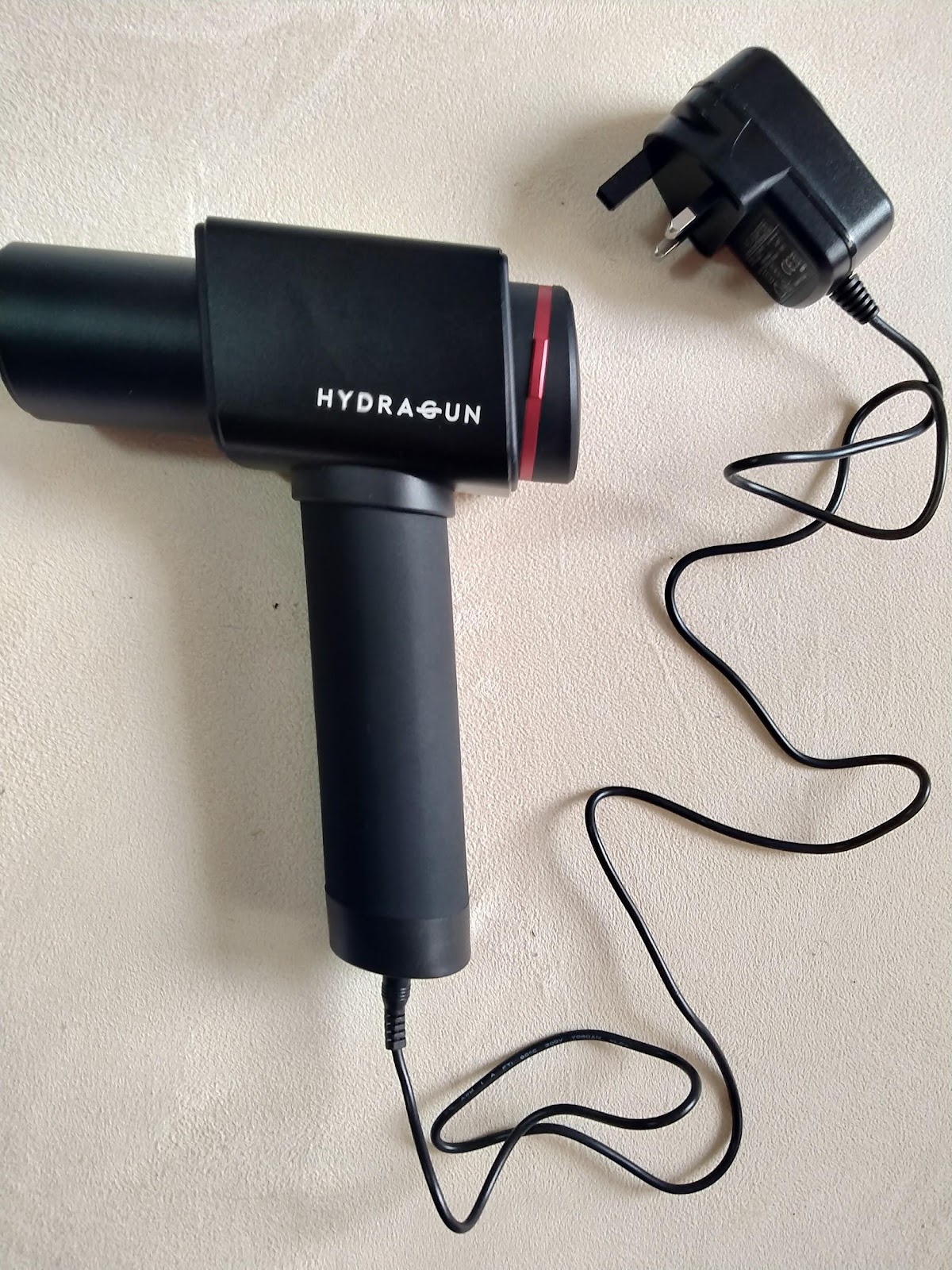 The Hydragun kit includes a wired charger (comes with an adapter for AU orders btw, just forgot to include in the photo) and it’s a pretty simple charging process.

You connect the charger at the base of the device and plug the charger into a wall socket. Charging time is about 30-45 minutes. A full charge gives about 6 hours of battery life.

The super long battery life means it’s easy to bring this device on the go and you can have several days’ worth of massages on a 45-minute charge time. 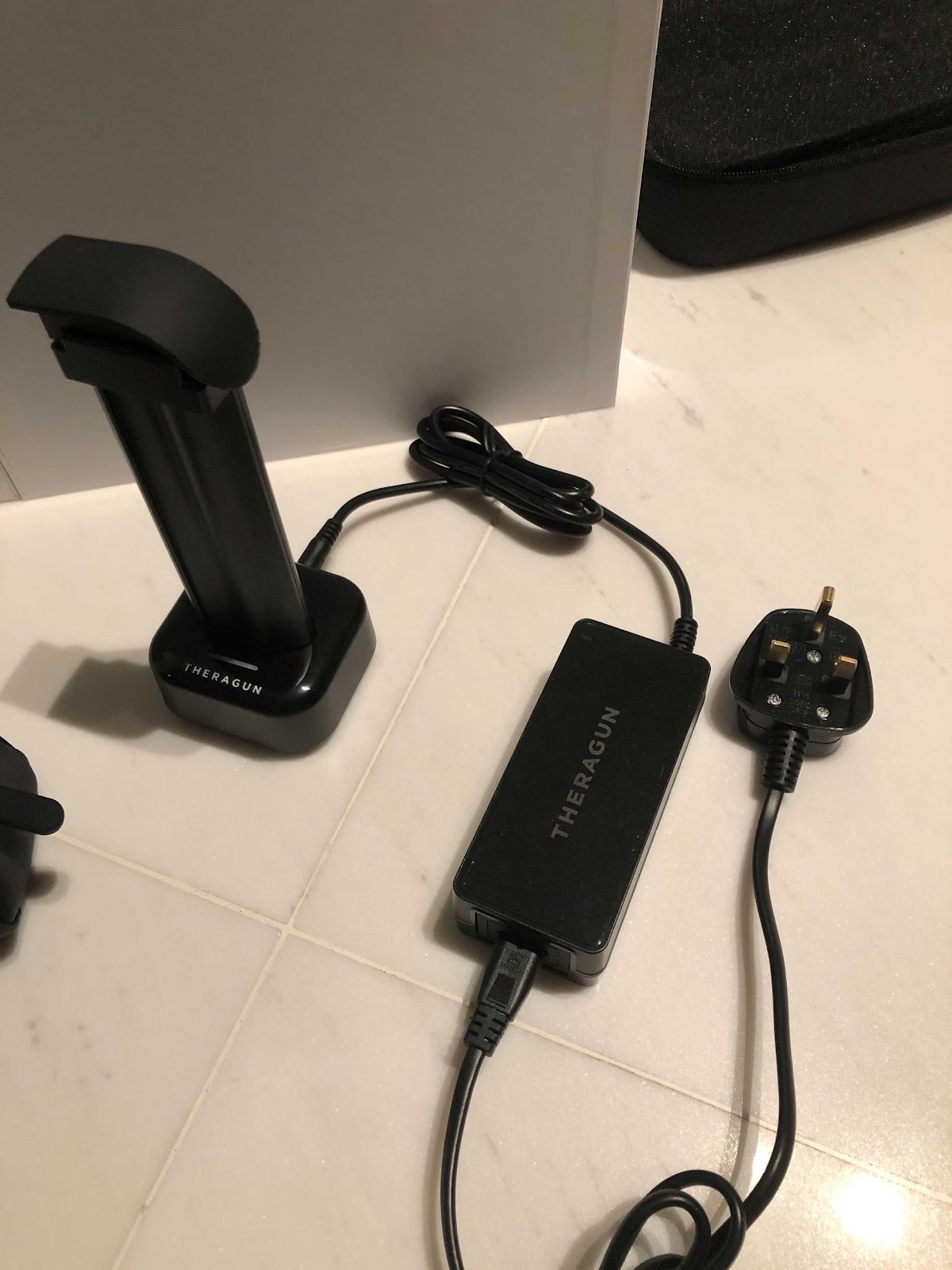 On the other hand, this is what Theragun’s charger looks like. And we‘re just going to say it:Theragun is such a hassle to charge.

Theragun comes with two battery packs, one power charger, a cord for the wall unit, AC cable and a power supply. All these we had to use and plug in when charging the device. There’s a wireless charging stand that you can get for an additional $79.

And Theragun’s battery life is at 5 hours, which is not bad. What turned us off is the number of components involved just to charge a battery pack.

VERDICT: Hydragun is the winner here. The impressive battery life is quite convenient for people on the go. Plus you don’t have to worry about using several charging components that you’d likely misplace anyway.

At 50dB, the Hydragun is a quieter device than Theragun which buzzes in at 60dB. 50 decibels is actually softer than a normal conversation or the hum of a refrigerator. 60 decibels is about the same sound as an electric toothbrush.

We tested both devices while watching TV. At level 1 we can barely hear the Hydragun over an episode of “The Crown”. It was surprisingly quiet! A colleague said that it’s likely because the device has a smaller, brushless motor than the Theragun, hence the much lower noise levels.

The Theragun on the other hand, DID feel more powerful once we turned it on. At level 1 though, we’d have to say that it’s much noisier than an electric toothbrush. Going head to head, Hydragun’s fastest speed – Level 6 – makes as much noise as Theragun on it’s speed Level 2.

VERDICT: The punchier Theragun loses this round. We cranked it up to its fastest speed setting, it sounded like a jackhammer and we just couldn’t stand the noise and we did ask each other how we can possibly use this in a gym or office without irritating other people in the room.  HYDRAGUN hands down is the quietest massage gun we’ve come across.

With an amplitude of 16mm, Theragun gives a powerful, punchier massage. We felt its muscle relaxing effects within a few minutes of using the device. As mentioned earlier, the adjustable arm allows for more massage “angles” so it’s easier to get to those hard-to-reach areas on the upper back and between the shoulder blades.

Although the Hydragun is way quieter and also easy to use, it doesn’t provide as deep a massage as the Theragun. With only 11mm of amplitude, this isn’t surprising but it does provide a satisfying enough massage experience.

We did appreciate though, that the Hydragun has 6 speed levels. The gradual increase of speed allows for a more personalized massage. With Theragun, we went from 0 to 100 in a second and frankly, we can’t say that everyone would be comfortable with that.

VERDICT:  Because it provides a deeper percussive action, the Theragun is the stronger massage gun. The higher amplitude gives a deeper massage and its adjustable arm makes it easier to get to those hard-to-reach areas.

Before we go into our conclusion, here’s a side by side comparison of each of the gun’s specifications:

If you’re keen on getting a massage gun Australia has two strong contenders for the best device of 2020.

And after a thorough comparison, we think that the Hydragun gives Theragun a serious run for its money.

It’s an impressive device, and we appreciate its minimalist, sleek design and it’s the quietest massage gun we’ve had the pleasure of reviewing. It comes with a year and a half warranty and a 30-day money back guarantee and for $300 less than Theragun, you get a solid massage gun for a much cheaper price.

Why You Should Visit Brussels in Your Life?

Brussels is Belgium’s royal seat and capital, Along with being
Travel
Bella Smith March 2, 2021 0 comments

LGBTQ: Paris By Night With A Lady Boy

A lady boy is a person who has different sexuality
LGBT Lifestyle Sex
Jenny February 28, 2021 0 comments

5 Tips To Make You A Phone Sex Expert!

Ms. X: How the trend of male companionship has changed in the last decade

Ms. X: Everything You’ve Ever Wanted to Know About Cam Chat Platforms

In recent times, the truly magical world of the best
Beauty Women

What Do Women Really Want in the Bedroom?

The bedroom is a sacred place and as a couple,
#INSC #INSCMagazine Dating & Relationships Sex
John Miller January 26, 2021 0 comments

5 Ways To Connect With Your Partner

In recent times, the truly magical world of the best
Beauty Women
Do NOT follow this link or you will be banned from the site!
%d bloggers like this: