With the growing mobile app development market, the mobile applications nowadays are using all the technology and innovations to make the apps user experience better and IoT is one among those. With the advent of IoT now the devices can communicate with each other and form a network giving a great user experiences. Integration of IoT in mobile applications is now a necessity to offer a new level of services pinched with the innovation.

According to a recent statista report the IoT connected devices have increased substantially from 2015 and are estimated to raise more. The following graph shows the same. 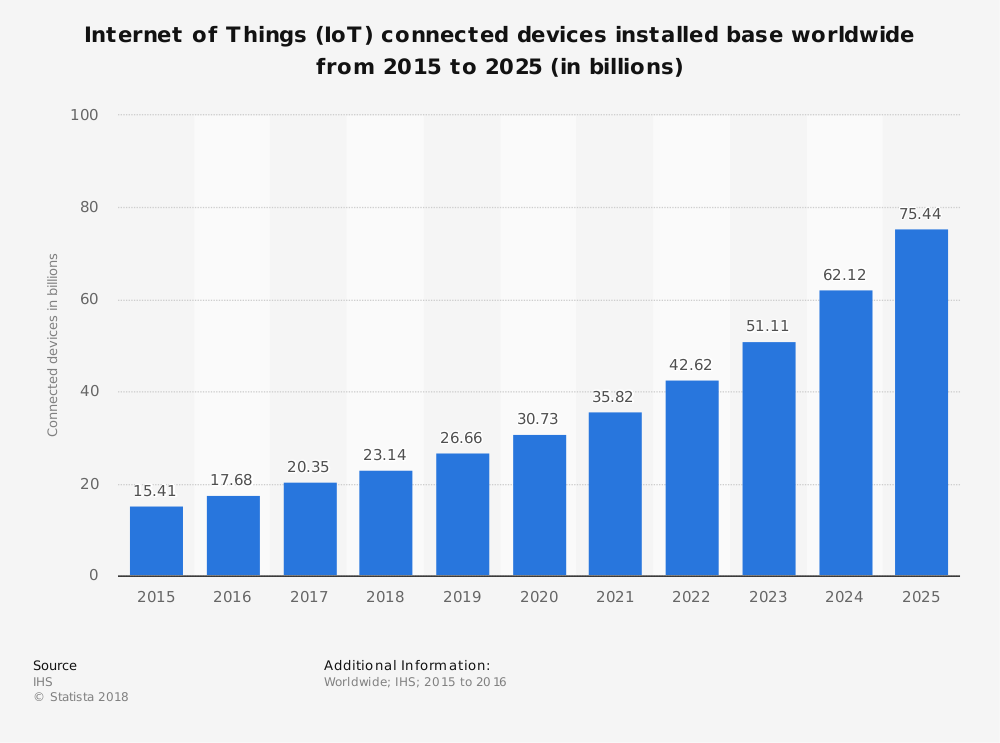 Looking at these advantages of IoT it is clear that mobile apps are the future of IoT and there are ways in which this concept is going to impact the app development. Some of them are:

The IoT has made the work and life easier for everyone be it users or the developers. It offers interactive solution to manage all the devices by the means of an app. The developers work is also made easy as they have to design and put fewer efforts to build innovative solution.

With the IoT enabled apps coming in picture nowadays the developers have to focus more on the integration of various devices rather than the user experience of the mobile application. They have to now work with the smart connected devices and the sensors attached to them.

Since IoT is all about the smart devices and their connection there is lot of data transferring by them. This contains users data which is being transferred so extra precautions needs to be taken while designing the app so that user data is safe and secure.

IoT is a new technology and to design and develop apps supporting and integrating IoT the developers must have specialized skills and talents to handle the physical devices connectivity. They need to be specialists in the IoT technologies to develop highly competitive apps. Only the app development knowledge is not enough to succeed in IoT app development field.

It is of utmost importance that the modifications are done in the methodologies followed and the existing apps to include the IoT components. The mobile apps designed should have the capability to deal with the smart devices and communicate effectively.

Some of the points that one should keep in mind while having an IoT integrated mobile application are:

The only thing that has to be kept in mind in the IoT based development is the data security of the clients and the users as according to new regulations strict policies are present for the personal data of the users. So the mobile app developer not only have to focus on the design and features implementation but also the security and privacy features of the application to make it worth investing and using.

Living: How To Live The Free Camper Life!

If you are a true freedom lover, you know how
Lifestyle Living
Bella Smith October 21, 2021 0 comments

The drains are getting blocked easily and it causes trouble
Home Improvement
Bettina Cabana October 21, 2021 0 comments

3 Tips for Recovering Mentally After a Sports Injury

10 Fantastic Benefits of a Vegan Diet