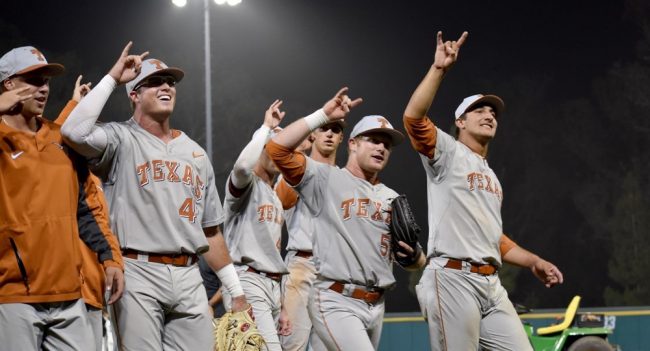 The Texas Longhorns defeated Long Beach in a battle of endurance, 5-3. The game went to 12 innings, but Texas came out on top. Three solo home runs and a 12th-inning two-run single from Travis Jones sealed the deal. The Dirtbags were the top seed heading into the matchup. Texas was the second seed. The Longhorns will now advance to the Long Beach Regional Final.

Long Beach took an early lead, with baserunning awareness. Texas answered back in the second inning. Redshirt-junior Brett Boswell slammed a long ball that tied the game at 1-1. The Dirtbags hit their own home run in the second, giving them the edge back. The score stayed 2-1 over the next four innings of baseball.

In the seventh inning, it was Brett Boswell who evened the game up. He launched his second home run of the game. The Longhorns were back in it, with the score at 2-2. Just like in the second, Long Beach was quick to respond. An unearned run in the seventh put the Dirtbags back on top. This run was manufactured by more excellent baserunning skills.

In the eighth, senior Zane Gurwitz answered the Long Beach Dirtbags with his own home run. That solo shot made it 3-3. The score would hold, and send this NCAA matchup to extra innings.

In the 12th inning, Long Beach walked two, one intentionally, and gave up a single. There were two outs, with the bases loaded, when Travis Jones stepped up to the plate. With the count at 1-1, Jones knocked a single to left field, allowing two runs to score. Texas took the lead, at 5-3.

From TexasSports.com: Beau Ridgeway, who tossed a perfect 11th, returned to the mound in the 12th looking to finish things out. After a one-out single, Ridgeway (2-2) got a strikeout and a groundout to end the ballgame and move the Longhorns to 2-0 in regional action.

The Long Beach Regional Final will be played Sunday.

Follow Blake Cole on Twitter (@blakeacole) for more on Texas Longhorns baseball, and other MLB and MiLB news.

Interviews and Features: Q and A With “Reasons” Pop/Dance Songwriter and Producer, Ruff!

Many men do not want to talk about symptoms of
#INSCMagazine Men Relationships Sex
Robert D. Cobb February 20, 2021 0 comments

Puerto Vallarta is an excellent place for tourists. It is
Travel
Bella Smith May 6, 2021 0 comments

5 Best Places to Visit in Kingston for First time Visitors

What if you are going to that place, whose rich
Travel

Everything You Need To Know About Manga

Are you someone who has been wondering what exactly read
Culture
@TheInscriberMag April 26, 2021 0 comments

Hopefully, you can forgive the misleading nature of this title.
#INSCMagazine Culture Lifestyle
Food Advertising by

Many men do not want to talk about symptoms of
#INSCMagazine Men Relationships Sex
Robert D. Cobb March 24, 2021 0 comments

Pandemic Killing Your Libido? 5 Sexual Health Tips to Get You Back on Track

Pandemic bed death is totally a thing, and here’s how
#INSCMagazine Coronavirus Sex

When was the last time someone closely examined your skin?
#INSCMagazine Beauty Women

Surprise Her For Your Anniversary–Gift Ideas

When was the last time someone closely examined your skin?
#INSCMagazine Beauty Women
Do NOT follow this link or you will be banned from the site!
%d bloggers like this: